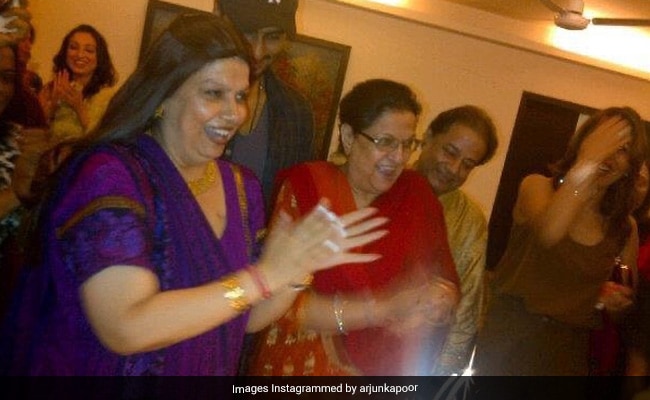 Arjun Kapoor was all emotional as he posted a birthday wish on Instagram for his late mother Mona Shourie on Monday. The post came with a picture of Arjun Kapoor standing behind his mother from what appears to be Mona Shourie’s “last birthday” with family. She died in 2012, years later after her divorce from Arjun Kapoor’s father Boney Kapoor in 1996. On Mona Shourie’s 56th birth anniversary, the 34-year-old actor wrote, “I hope you are smiling right now wherever you are.” Arjun said that he had “assumed” that there would be more such celebrations and added, “This picture was the last birthday we had together and I just assumed we would have many more.”

Arjun Kapoor further wrote, “It’s selfish to say ‘I miss you’ all the time but I really do ya. I try and be strong cause that’s the way society expected me to be at the age of 25 when I lost you forever. They all expect you to figure it all out, with your life taken away from you, I was supposed to sorted and what not. But I’m not strong enough on most days. I just ride it out. Anyway, as usual I sit and complain and trouble you with my non sense” and added, “Happy birthday mom. Wish we had more time together.”

On the Instagram post, he also mentioned his sister Anshula Kapoor’s new achievement. She recently opened up a new venture which brings celebrities and their fans closer by involving them in activities like baking or playing a sport. The venture in turn helps raise funds for charity. Arjun Kapoor, in the ending note said, “PS – Anshula Kapoor started Fankind and she’s kicking a** just like you did.”

Take a look at Arjun Kapoor’s post for his mother here:

On the work front, Arjun Kapoor is currently working on his next film Sandeep Aur Pinky Faraar, which will also feature Parineeti Chopra. The Panipat actor will also star in a romantic film with Rakul Preet Singh.