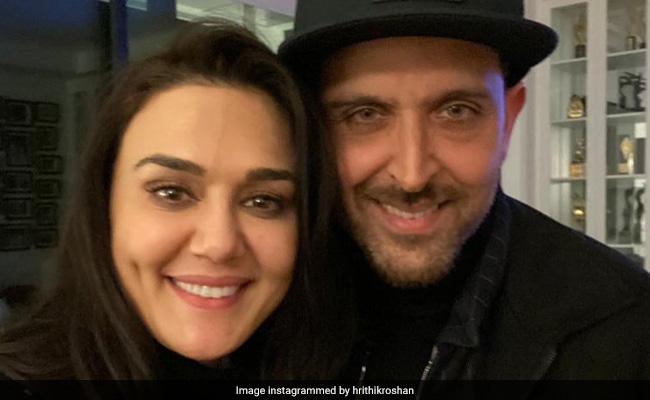 Preity Zinta, who turned 45-years-old on Friday, gave us a sneak peek of her birthday party by posting pictures from the celebrations on her Instagram profile on Sunday morning. Preity was joined by her husband Gene Goodenough, and a very special friend. We are talking about Hrithik Roshan, who has co-starred with the actress in films like Koi… Mil Gaya, Mission Kashmir, Lakshya among others. Hrithik, who was in LA (going by his Instagram post), shared pictures from Preity’s birthday and wrote: “Thank you for such a joyful night Gene and Preity. Happy birthday. Was surreal seeing you at the top of your game here in LA. Have a super jaadu year. #bestnight #oldfriendsarethebestfriends #newfriendsmade #loveyou.”

Meanwhile, Preity also posted pictures from her birthday on Instagram and she wrote: “Thank You everyone for the wonderful birthday wishes. I can truly say I’m blessed and humbled by all the love I receive from my fans, friends and family. Thank you all for always being there.” She added the hashtags #bestbirthdayever #chillin #lanights #patiparmeshwar #friendsforever #ting to her post.

Preity and Gene Goodenough got married at a private ceremony in Los Angeles, on February 29, 2016. The actress made her Bollywood debut with the 1998 film Dil Se.. and is best known for her performances in films such as Kal Ho Na Ho, Koi… Mil Gaya and Veer-Zaara among many others.

On the work front, Hrithik Roshan was last seen in the blockbuster hit War, co-starring Tiger Shroff and Vaani Kapoor. The actor has not announced his upcoming project as of now.