Those lyrics are from the classic Disney song “A Pirate’s Life for Me,” but now they pretty much sum up college football in the state of Mississippi.

On Thursday, a day in SEC history that will forever live in glory or infamy but probably both, Mississippi State walked the plank of irreverence and hired swashbuckling football coach Mike Leach away from Washington State. Ole Miss made a huge national splash when they hired college football bad boy Lane Kiffin last month, and now Starkville has countered with the coach most likely to own multiple cosplay outfits.

Leach, an eccentric of the highest order, famously loves all things pirates, so Mississippi State director of athletics John Cohen announced the news on Twitter with a video of “Pirates of the Caribbean” hero Captain Jack Sparrow standing atop the mast of a ship and eyeing a flag of the Bulldogs.

Time to get weird, SEC. 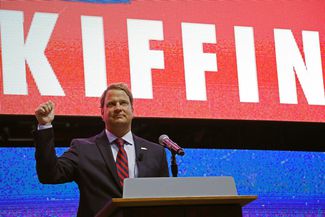 Leach is, how to put this euphemistically … a bit unconventional. His news conferences are bizarre comedy compared to the usual ho-hum coachspeak from the CEO types leading most major college football programs these days. His sense of humor is off-color. For example, he recently endorsed the idea of burying a life-sized skeleton from Party City under a newly constructed patio just to give the next homeowner a good scare.

My kind of guy.

Who is Mike Leach? As a football coach, he’s an offensive savant akin to Steve Spurrier. His teams put up points. As a person, Leach would do well at the FloraBama, but he prefers the pirate life in Key West.

Back in December 2017, Tennessee fired its director of athletics, John Currie, for trying to hire the man.

And, now, that guy is going to be lining up against Nick Saban next season with the team that ended the college career of Alabama quarterback Tua Tagovailoa. Lord help us all, but especially SEC commissioner Greg Sankey.

It’s saying something about the SEC West these days that Leach is the coach in Mississippi who Saban can probably tolerate the most. Alabama’s legendary coach, of course, was so sick of Kiffin’s nonsense that he fired him as offensive coordinator a little more than a week before the 2017 national championship game in Tampa.

It’s always crazy in the SEC West, but the division has been on a historic bender these last couple months thanks to the wonderful Magnolia State. First Ole Miss hired a man who some know as “Joey Freshwater,” and now Mississippi State has countered with the most colorful guy in college football.

Talk about devils and black sheep, and really bad eggs. Kiffin is like a modern-day living mascot for the Rebels, and Leach probably wouldn’t mind actually being a team mascot.

We all thought the Egg Bowl achieved a new level of Southern charm when the Ole Miss receiver famously did the “fake dog pee end zone celebration” thing. That was just the beginning of the madness. Both coaches tied to that silly spectacle are now gone, but the schools have doubled down on shock value.

Kiffin, we love you, but you’re no Leach. I’m not quite sure if that’s a good thing or bad thing at this point. We’ll let the recruits decide.

Oh, yeah, recruiting. Imagine being a parent of a high school football player in the middle of that battle. Son, are you sure you don’t want to play basketball or baseball?

Who’s the better hire? It’s like picking between bourbon and rum. In the end, they both do the same thing. Welcome to the party. (For the record, Leach is rum in that boozy simile.)

What a time to be a sports writer covering the SEC West. Arkansas even upgraded the fun factor by hiring former Georgia offensive line coach Sam Pittman. Pittman’s thing is he screams, “Yessir!” after he lands a recruit.

It was all so boring just a couple years ago. LSU coach Ed Orgeron changed the sensibilities of the division, and now, suddenly, it feels like the wackiest league in sports. It will all be fun while it lasts. Leach’s Air Raid offense leaves Washington State having lost seven straight games to rival Washington. He probably won’t last half that long if he can’t beat Kiffin.

What is Leach’s plan to compete with Alabama and Auburn?

SEC Media Days can’t get here fast enough. It’s seven months away, so plenty of time to craft that perfect question for Saban about pirates and rebels.

Joseph Goodman is a columnist for the Alabama Media Group. He’s on Twitter @JoeGoodmanJr.